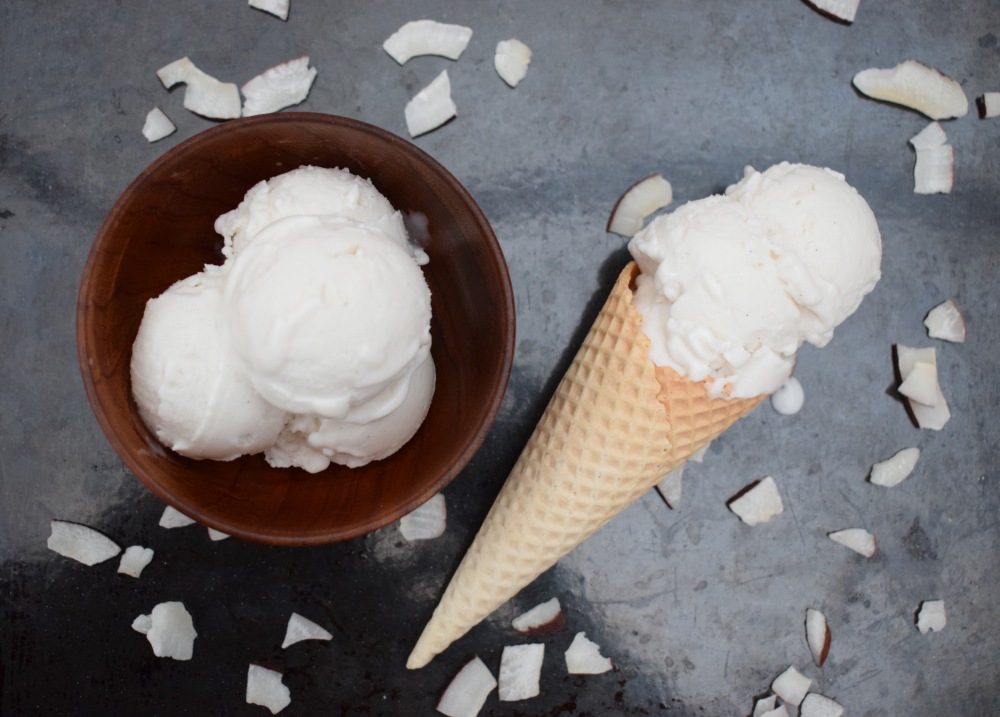 With my current dairy free journey , I needed something to replace my love for frozen yogurt. With the sun rays getting stronger over the last few days, I knew I had to find an ice cream recipe that was creamy, not too sweet and could be enjoyed alone or with my other favorite bakes, such as Rhubarb cake and apple crumble. As I kept getting directed to coconut milk as an alternative base to yogurt or cream, I was afraid that my end result would be frozen ball of sickly coconut, with the taste like the artificial coconut products that are scented to entice you but rather turn you away.

Well, after a few failed attempts of perfecting a recipe, I finally reached the goal of having two scoops of delicious coconut ice cream to join my slice Rhubarb cake. There are two factors that determine the success; firstly the tinned coconut should be a minimum of 60% coconut (the coconut milk I used had a coconut content of 75%). Surprisingly, ones I have found that contain a high coconut concentrate were supermarket own brands and some cheap Thai brands found in the local Asian stores. Secondly, after warming your mixture make sure you leave it to chill for a minimum of 5 hours! I impatiently skipped this process and highly regretted it, the ice cream will not set, but the ice cream maker will churn the mixture into a frosty slush and if it makes it to the freezer will become a nice block of coconut ice. Therefore I usually leave mine overnight to set before churning.

Designer and maker, exploring her love of travel and food as a creative outlet to escape the everyday. Resulting in recipes and visual journals that form a narrative of her magical encounters and experiences. View all posts by Arté Explores